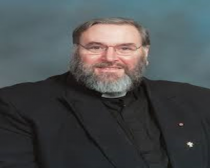 Fr. Douglas Terrien began his ministry at Our Lady on the River parish in July of 2018. He says: “I was born September 24, 1952 at St John’s Hospital on the east side of Detroit. I attended St. Brendan grade school and went to St. Rose of Lima High School in Detroit. St. Rose clustered and moved to St. Catherine Parish and became East Catholic High School. It clustered once again and moved to St. Anthony parish. I graduated in 1970. Fall of that year I entered Sacred Heart Seminary and in the fall of 1974 I entered St. John’s Provincial Seminary in Plymouth, Michigan. I was one year as a transitional deacon at St. Agatha in Redford Township. On April 28, 1979 I was ordained by Cardinal Deardon and sent to Sacred Heart parish in Roseville, MI. Then 1980 to 1983 I was assigned to St. Mary, Queen of Creation in New Baltimore. From 1983 to 1985 I was assigned to St. Veronica’s in East Detroit now East Pointe. From 1985-1988 I was assigned to St. Isaac Jogues in St. Clair Shores. From there I went to St. Justin in Hazel Park as administrator also being the administrator of St. Paul’s Albanian Church in Warren. In 1993 I became the pastor of Immaculate Conception in Lapeer, Michigan and was there for almost 25 years. I thought I would retire from Immaculate Conception in a few years but Archbishop Vigneron got on the phone and personally asked me to come to Our Lady on the River parish. I think he remembered I spent my summers as a youth on Harsens Island and knew I was familiar with this parish. I have to smile when I am welcomed to Harsens Island because my family has been on the Island for five generations. When I say mass at St. Mark’s I am flooded with memories. In fact I think my memories go back as far as or even further than the oldest parishioners on the Island. I am so pleased with the welcome I have received from the whole parish and I am happy you are patient with me as I climb up and down the stairs in church. I am living at the rectory at St. Mark’s because it is a ranch style house–few stairs and everything is on one level. I am also happy to be sent to a parish named in honor of the Blessed Virgin once again. Her powerful intercession is most valuable in my deliverance ministry. I also want to mention I was State Chaplain for the Knights of Columbus from 1994-1996 so I am ready to do all I can to make both K of C councils in the parish successful.”